"I looked at cancer as a team sport" says cancer survivor

Mark Ciccarelli was diagnosed with Hodgkin disease when he was 9 years old and just about to enter the fourth grade. He did his best to pretend it wasn't that bad, forcing a smile and imagining a time when he'd be cancer free.

Mark missed a lot of school that year, because of the chemotherapy and then the radiation. But he took part in as many activities as he could. There were times when he'd go outside and play kickball hooked up to a catheter in his chest—partly to feel like a normal kid again and partly to reassure his family and friends that he was alright.

Now Mark is 26 years old and cancer free, and he works as a financial advisor. He recalls that when he was going through cancer treatment as a kid, although he couldn't know all the specifics of his cancer, he did know that he had to endure and find strength in every way possible.

Today he credits his support system in helping him do that.


There’s nothing better
than being able
to help others.

"I looked at cancer as a team sport; on my own I would never win, but if I opened up to the positivity of others around me, I knew I would have a fighting chance," he says. "While every day brought on new challenges, both mentally and physically, I always felt love and support from my family, friends, and classmates. Those were the key factors that helped me get through my cancer diagnosis."

Mark also realized how helpful it was to connect with someone who was having a similar experience. "It gives you a lot more strength to talk to someone who understands what you're going through firsthand," he says. "As a 9 year old with hair falling out and constant nausea from medication, I had a really hard time understanding why I was sick. It caused me to be quite shy. I finally felt better when a family friend who had cancer sat me down and spoke to me about our shared experiences. Then I didn't feel like I was the only one."

, an interactive Web site that he created. The site allows cancer survivors, family members, and caregivers from around the world to share their experiences, reasons for hope, and other messages of encouragement. The site has hundreds of members and gets thousands of hits a day.

"I understand that I'm very fortunate to be here doing what I'm doing," Mark says. "There's nothing better than being able to help others."
Posted by Unknown at 1:54 PM No comments:

Positive Results In Kelly Changed Her As Person!

Kelly Turner, a New Haven, Connecticut, police officer, found a golf ball-sized lump in her breast when she was 36 years old. It turned out to be stage 3 breast cancer.

In July of 2001, Kelly began 4 months of aggressive chemotherapy. She had a mastectomy and reconstructive surgery the following January, then radiation therapy 6 months later.

The entire time, Kelly's close friends gave her a tremendous amount of emotional support and helped her through medical appointments and treatments. Her coworkers and church family collected money, and also organized a motorcycle ride and a hockey game to raise funds that could help with her expenses. Kelly coped with the uncertainty of it all with the help of her loved ones, with prayer, and with spiritual music and talks.


I went through cancer
so I could do what
I’m doing now.

On January 1, 2003, after missing 18 months of work, Kelly returned to the police force. Encouraged by the outpouring of emotional and financial support she had received from her friends and coworkers, Kelly decided to help other people the way she had been helped: she formed The Chain Fund

, an organization that provides financial assistance to cancer patients and their families. Even though she's helping others through the project, the project is helping her, too, by giving her hope and strength. As she puts it, "I love to be a blessing to others! I enjoy making someone else's life better—even if it's just for a moment in time."

Today, Kelly is cancer free. The Chain Fund has grown to address various emotional and physical needs for cancer patients and families, while continuing its financial focus. Kelly describes herself as shy, but she tirelessly solicits donations and grants for The Chain Fund, holds events and fundraisers, and always thinks of ways she can help others.

Kelly believes cancer changed her as a person. Although she would never want to go through the traumatic and difficult time again, she sees the positive result from it. "I don't think I went through that whole cancer experience to not do anything," she says. "I believe I went through it so I could do what I'm doing now."
Posted by Unknown at 9:25 AM No comments:

The "Hope Through Cancer" Outreach 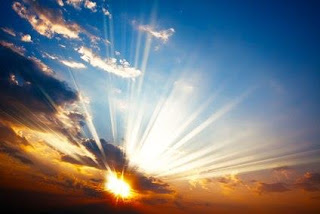 The "Hope Through Cancer" site has been created because of the journey my wife and I embarked on when we found out that she had ovarian cancer stage 3C. We were then on strange territory never trod or walked before. I started living with cancer because I was married to her, but she lived with cancer because she was diagnosed with it, not to mention the health was deteriorating and she new something was wrong. The future blogs will be her thoughts and feelings and encouragement to those that follow along and who need to know that you are not alone. If you have cancer be assured that hope and encouragement can be found on the journey we are on together.
Check the link below as we build the website.
www.hopethroughcancer.com
Posted by Unknown at 12:15 PM No comments: 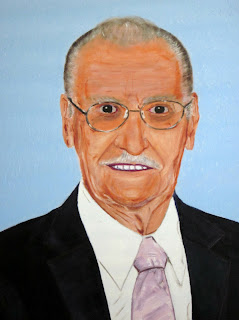 This is my father's oil on canvas painting portrait. He had prostate cancer, and 1 out of 3 people will have cancer in their life time.
This could be your portrait or someone you love, or a gift to someone you love. Portraits are painted on canvas board 16"X20" and framed if wanted. "Hope through Cancer" is supported by arts and crafts to allow us to help those that are going through cancer. A support group is now in the making to encourage and give hope to the cancer survivors. For more info please go to our website
http://hopethroughcancer.homestead.com/index.html     and join the blog. Direct others to this site especially if they are cancer survivors and that will already be a support to cancer survivors.
Posted by Unknown at 10:38 AM No comments:

What Cancer Does In A Positive Way!

When Gary Johnson went in for surgery to remove a cancerous prostate, doctors discovered that the cancer had already spread to his lymph nodes. Now he's on a treatment that is designed to hold the cancer cells in check for as long as possible. "Since there's no cure for my cancer, my challenge is to live as long and as well as I can," says Gary.

Unwilling to sit back and worry, he and his wife Marlys focus on being proactive in facing down the disease. They have gathered a team of medical professionals, family, friends, and other cancer survivors as a support system. Gary has also changed his lifestyle—he's getting more exercise, getting better nutrition, and finding ways to manage his stress.


My challenge
is to live as long
and as well as I can.

Gary's cancer diagnosis completely changed the priorities in his life. He's now focused on family, faith, and the outdoors. He and Marlys established the 501(c)(3) non-profit Cancer Adventures

, and travel across the United States, telling their story to cancer survivors, students, and health professionals.

"Not knowing what the future holds is the hardest part," Gary said recently. "The three things getting me through every day are my faith, my wife, and having this purpose to help others. Having a purpose has turned a negative into a positive."

Pass these stories on to your friends that are affected by cancer. Join the "Hope Through Cancer"
blog at http://www.hopethroughcancer.com/
Posted by Unknown at 3:27 PM No comments:

In Who Do We Trust Having Cancer? Join the hope through cancer blog to get updates and encouraging news. Pass this on to those that are cancer survivors or caregivers.
http://www.hopethroughcancer.com/
Posted by Unknown at 6:36 AM No comments: 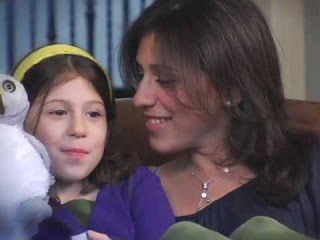 No hands or feet, but very inspiring, and encouraging( must see)

See this inspiring video of this person that will encourage any one that is facing trials in life, be it sickness or loss. There is hope in any situation.  See video https://www.youtube.com/watch?feature=player_embedded&v=W5mbldTkruM
Posted by Unknown at 6:05 AM No comments:

Having Hope While Going Through Cancer 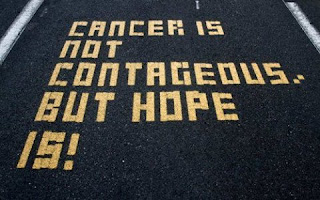 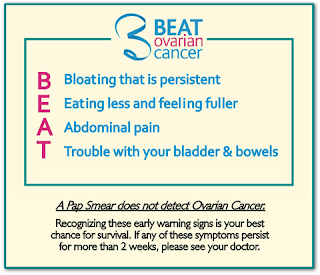 Posted by Unknown at 3:30 PM No comments: